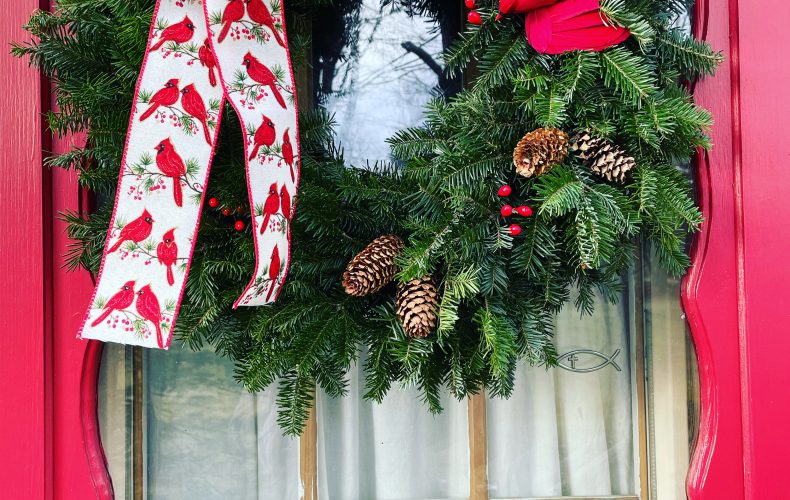 When December hit, I promised myself "I'll have a very Lonnie Christmas."

Lonnie loved Christmas and I don't mean just a little. As soon as it was considered reasonable, her house transformed into a magical place well beyond its usual charm. The house seemed to burst with Christmas spirit. You'd barely have the door open and the smell of pine or cinnamon would hit your nose, and the warmth of the heat turned up kissed you on the nose before you fully stepped inside.

Santa's, nutcrackers, and snowmen covered the shelves and walls – paintings, figurines, ornaments, and more. Greens stuffed inside a vintage flour sifter high-up on a shelf, or inside other glassware with mouths ready to hold the cheer. Everything was a dazzling red and green, from floor to ceiling in the kitchen, the living room, and even the bathroom.

A nutcracker the size of a small child greeted you in the living room. A Christmas village with its residents bustling around the cobblestone streets seemed to wave at you from inside the china cabinet. Santa's LEGO elves and reindeer were ready to take flight off the TV stand. And, there, in the corner of the room, as always, the most beautifully decorated Christmas tree. Lonnie purposely bought one with plenty of gaps and holes in it so she could fill the tree with hundreds of ornaments, layering them one behind the other from the outside in, if she could. The tree was mesmerizing and if it would have ever opened a portal into some other dimension, I wouldn't have been surprised.

It's the first year without her and everything this month has seemed to remind me of her, much like it did when she first passed in January of this year. Except, 11 months into grief, I can be reminded a lot of the time without completely falling apart. Not always, but mostly. There's the pang of longing for her to still be with us, but there's also the fullness of her love and warmth.

As promised, I'm having a very Lonnie Christmas.

I decorated the tree and paused a little when I came across the pickle, remembering the way we rushed off the school bus trying to beat each other through her front door and stripping off our winter gear to get to the tree first. Whoever found the pickle the fastest, got M&Ms. You would have thought it was gold.

I hide it now for Kay to find, though now that we've found a mini one that only he can see, he hides it for me. We split the M&Ms.

I ran my fingers over each Christmas decoration I uncovered that she had handmade: the wooden Santa, the 6-block children's Santa puzzle made out of a greeting card, the egg carton Christmas tree, the tiny Christmas dollhouse we had painted together and topped off with fake snow on the roof.

And I patched up any decoration I made with her. The wine bottle snowman's hat had come unglued. The miniature sleigh and train's caboose on my own egg carton tree needed refastening.

I made her peanut butter fudge recipe and her spinach balls and wondered how many of her delicious creations I could find time for. The shortbread? The peanut butter balls? The hard candy?

Kay and I made Santa sock gnomes, dragging out all of the materials she had handed me one afternoon last summer. That knowing look passed between us; we didn't need to say anything. I just nodded and took them home.

We go to the Christmas Loft, my companion, Kay, and me, and it's the only other place that holds the same Christmas magic as her house did. Perhaps because she was the person who loaded all us kids up and took us there once a year. We would head straight for Betsy, the dairy cow, who would sing from her stall with her Santa hat on.

Betsy's still there but she can't sing anymore. And the life-sized Christmas village is still in the center of the store but now I have to duck to peer into the windows and look at the mannequins. I worry a little about the arched bridge when I step on it, a good deal heavier now. But I still walk around slowly, peering in each house, taking slow sips of nostalgia.

I went with Bruce, Lonnie's husband, to get the tree. The same farm they've been going to for probably 20 years. Last year when I went, she was with us. My job was to be her eyes, her feet, and her song. She couldn't get out of the truck; she was too weak to walk the grounds and the terrain was too unsteady.

From the truck she pointed at ones that had promise and I would go over to inspect, looking for holes and gaps, looking for what I knew she would want. When we found 'it,' I stood behind the tree, singing, "I'm singing! I'm singing! This is the tree! Fa la la la.!" (Or something to this effect. There's some embarrassing video somewhere of this). I sang because that's what she would tell the kids. "You know how I know it's the right, tree," she would say, watching their expressions. "When it sings to me." It became a running joke and tradition that when she would go to pick out the tree, she'd bring one of the kids with her, and when they found it, they would go behind and sing.

So I sang behind the tree, I helped cut it down and load it and we took it back to their house, knowing it would be her last tree.

This year we couldn't drive onto the grounds because it was too busy and Bruce was the one this time too weak to walk. We would pick a pre-cut one. But on our way to the pre-cuts we stopped at the little hut in the middle of the driveway to choose a wreath.

On our way to the farm, I had asked Lonnie, "If you're with us today. Please send us a cardinal."

We stopped at the hut to speak with the owners and to choose a wreath and there directly across from me was a wreath entirely decorated in cardinals.

"We should get that one," I said and nodded at it. "She loved cardinals."

Back at the truck, I peered over the cab at him, still holding the wreath. I told him what I had wished for and then lifted the wreath so he could look at it again.

We climbed into the truck with fresh tears strolling down our cheeks.

I've been putting out Elf on the Shelf which I'm not entirely sure that Lonnie ever really liked or understood, but one night I put Bouncy the Elf on Greta the Goose. Greta originally lived at Lonnie's house, the keeper of the Christmas books because that's where she always seemed to sit. At least until the year that Lonnie passed her on to me and now she sits on my Christmas books and Bouncy, sometimes, sits on Greta. That part I think she would laugh at.

Every day we've been opening up our desktop advent calendar. I smile as soon as the music starts and the village appears. Lonnie started sending me one of these Jacquie Lawson advent calendars each year when I was in my 20s. Even in her final days, she sent me one for last year, too. This year I bought one for myself and for some of the people she would have to remember her by. And I sent some to people who had never seen this before, to spread the joy, to pass on the memories, to keep her alive.

One day I was driving back home after dropping Kay off from school and grief hit me like a truck. I'm not sure what triggered it, exactly. It could have been anything being that it's Christmas.

"Give me some sign today that you're with me, would ya? Anything. Just make sure I know it's you."

I gathered myself and got about my day.

That night, I picked Kay up from the afterschool program and he wanted to walk the park and show me all the lights that were dawning the trees. We walked through one big, lit-up tunnel, and I heard Christmas music coming from a speaker on the other side.

When we got to the other end, we turned to head back to the car. And then I realized the song – Santa Baby. The original version. I stopped.

I hated that song but Lonnie loved it. I turned around to face the speaker.

"Wave to Lonnie," I said and put my hand up in the air.

"Cause she's here and playing that song?"

"Really?!" he looked around, thinking we could see her. "How do you know?"

Every Christmas we would choose at least one craft to work on. For years we talked about making Christmas lamps out of mason jars, and it had been the plan for last year. But with COVID, and chemo, and then, end-of-life, we did no craft. There was no time.

This year I made the lamps.

This morning as I sat on my first day of vacation, sipping coffee, and thinking about going up this evening to see Bruce, I heard pecking at the window. I looked up to find one single chickadee, attempting to land on my screen and pecking at the corner of the window. The birdfeeders are only a few feet away but this one bird was at this window, making itself known. I wanted to rise and let it in, but, instead, I just looked at it and said, "Well, hello. I see you." And it flew to the nearest tree.