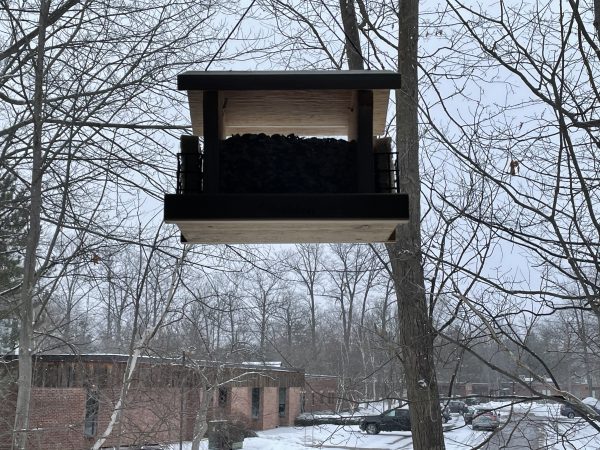 I grew up with "old" people who loved birds and bird watching. When you're no more than five, everyone is old. Now that I'm 35 and a mom, I get that I'm now the old one. But as a kid, it seemed your destiny was to become old and bird loving.  There had to be some coming of age when suddenly you would find birds fascinating and be able to name them by sight.

I couldn't figure it out even though I loved being in the woods. I loved being barefoot with my feet in the dirt. I was called to nature and yet older people's obsession with birds escaped me. To me, it was like people who could look at a car from a football-field's-distance away and know the make and model. Cars interested me even less (unless it was my grandfather's black 57 Chevy Bel Air with the turquoise interior which I still vow I would buy if I ever make a million dollars).

"Think about it," Lonnie had said one day. She was an older person who was bird obsessed. Like the queen of bird loving. At least in my mind. She had bird feeders hanging from the front part of the house you could see from inside the living room. She had a bird feeder that was attached to the kitchen window so you could watch them inside the box while you washed the dishes. She had them hanging off the back deck. And as she got older, the number of feeders increased.

"Don't you think it's incredible how they can build these sturdy beautiful nests for their eggs, high up there in trees, with just their beaks?" She pointed up into a branch where a bowl of the earth was nestled in the intercross of branches and trunk.

I looked at her and the nest. "Yeah, that's pretty cool, I guess."

Now as a mom, I think it's really damn cool and there is no guessing. I don't feel like I can do what I need to for my son with all my hands and arms, legs and feet, and other faculties, and yet these birds, some tiny in stature, are able to build structures to hold themselves and their fragile eggs, feet off the ground. Not to mention they can fly, that alone is badass.

I have come to appreciate it all over time and to see the beauty, strength, and freedom in these creatures. And I can understand why Lonnie delighted in them. I can see why they brought her joy and hope when she looked out the window in any room and could find a bird perched on a feeder or in the bath clamped to the deck railing.

I wish I had asked her when she was going through cancer the first time if she found herself on the really bad chemo days, looking out the window and drawing strength from the little winged creatures outside the window. Did she dream of flying? Did she dream of escaping? Did she think, "If only I could have wings?"

I wish I had asked her this last time.

The last week of her life, as I sat and worked from her and Bruce's dining room table, there came times every day I would stand up and turn around and look out the door in the kitchen that overlooked the deck.  Birds flocked to the trees in the backyard, the bird feeder post where four feeders hung, the feeders hanging off the deck, the railing, the bird box near the kitchen window, the tops of the swing set where children used to kick and pump their ways to the leaves that overhung the frame from the tree just behind.

They clung to the old Christmas tree leaning up against a deck corner, picking at needles and looking for seed that had been tossed inside there earlier that day. If Lonnie and Bruce were bird obsessed it seemed that the birds were equally as obsessed with them. Why wouldn't they be? They were going through 50 pounds of birdseed a month. I joked with Bruce that they were probably feeding all of the birds of the town. And that in the obituary we should write, "In lieu of flowers, please send birdseed."

I would stare out that window and count them or try to see which I could identify. The first was a futile effort as they never perched long enough and then would move and I would end up counting the same bird twice, I was sure of it. The second was pathetic as I had come to realize that for all of my years in their home, I had never learned more than the obvious ones - the black-capped Chickadee, the northern cardinal, the bluejay.

They had the Audubon bird book of the northeast which I recalled always being on the kitchen table growing up. Sometimes when they couldn't identify a bird, out would come the book. I always remembered its hunter-green, leather-like cover, even if it had no picture or words on the front. It was the bird book.

I remember flipping through and looking at the pictures, but I never learned how to use the guide. Not until the last week Lonnie died and in a moment of huddling around her care, Bruce and I were talking about the birds and he taught me how to use it.  Before then, I never tried to figure out how to identify the birds using the book.

But I looked out the window just the same, to escape the reality we were all caged in. That each day I showed up to perch on the dining room chair, was one day closer we came to stand on death's doorstep. Hospice had said she would go quickly as she had changed so drastically in a few days. She would be one of the rapid ones.

To escape the droning sound of the oxygen machine that rolled over the sound of the relaxing soundscape music station. To escape the clock showing how many minutes she had slept. Hospice had said she would start to sleep more and eat less. To escape the ache in my hips from sitting on the hard wooden kitchen chair for hours. To loosen the tightness in my chest as I knew I wouldn't have a good come apart until I left later on in the day.

I would not unravel while on watch. The words echoed in my ears, she's not dead yet. Four words I had said to myself repeatedly in college when my roommate's life had hung in the balance for a week after a tragic accident and it wasn't looking good but I refused to give up and fall apart until it was certain.

I would stand and go to that door, and look out that window, and press my forehead up against the glass, and feel the cool pane against my skin, and look at the birds, and silently cry. The only way to release a little of the valve and let out some pressure. And I would think about if she would come back as a bird. Would she give me a sign, a chirp, a song. Would my wonderful, bird loving Lonnie become a beautiful, free, winged creature with the power to build a nest with only her beak. Would that be enough to bring me solace or peace? Would that be enough to feel she was still with me?

Since she's passed, I've had my coming of age and hit my official "old people" status where I am now a member of the bird loving club. I know it's because it's one thing that keeps her close. I can't look out at my own bird feeders, which quickly went from one (a coke bottle feeder Kay and I made this past spring during the COVID shut down and an idea I stole from my childhood growing up at Lonnie's bird loving home) to three, and not think of her. 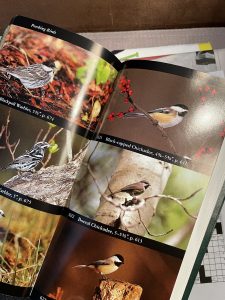 In her last week, she insisted that Bruce give me a Barnes and Noble gift card she had lying around. This was the kind of thing she fixated on in that week. Who to give useful gift certificates to and who would take her track phone minutes. It seemed nonsensical to me at the time, and I always eased her worries, saying we would find good homes, but now looking back I get it. She reached for any ounce of control she had left. And she could control gift cards.

So I took the gift card and I bought my own Audubon field guide. And I can now identify the tufted titmouse, the white-breasted nuthatch, and the ladder-backed woodpecker on sight. And for the birds I can't yet identify, while I try to use the guide, I also take pictures and send them to Bruce. Because even if Lonnie isn't around to talk about the birds, I am.

I think of her most when I see the chickadees. It was the first one I was ever able to identify. It seemed the most frequent one to come to her house and land close enough by to get a good look at. The closest ones to fly to the deck even if we were sitting out there. And I remember Lonnie saying, you can identify them easily with their call. "Chicka dee dee dee." I had laughed thinking she was kidding. "No, no, listen, you goose." So we waited and listened until we could hear one and sure enough it did kind of sound like that. 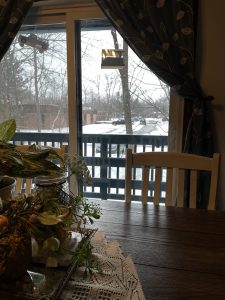 Just a few months ago I had taken Kay for a walk in the woods. We pointed out nests up in the trees and found myself saying, "Don't you think it's pretty neat that birds can make nests with only their beaks?" And teaching him the sound of the chickadee.

We now have our own coke bottle feeder and Audubon book as I did as a little girl at Lonnie's house. And when we sit down at our dining room table, we can look out our own doors to the deck and watch the birds at our feeders.

I am bird loving not as much because of the birds, but because of how much I loved Lonnie and how much I hope some part of her spirit soars light and totally free. And I know, whatever bird she is, she'll have the most beautiful call and I'll recognize her on sight.

4 thoughts on “Wonderful Bird Loving Lonnie and Me. Writing Through Grief.”