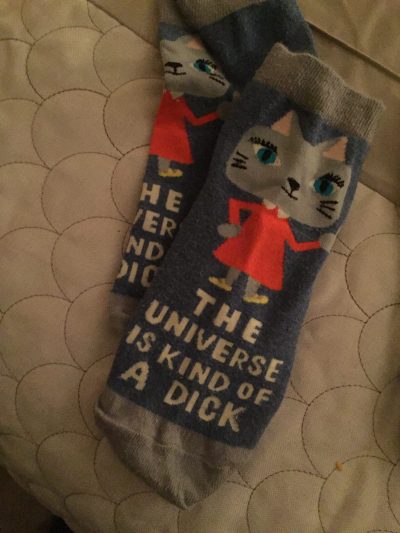 Recently I was speaking to a friend and in the midst of our conversation remarked “I run my life on hope.”

(You know, a car runs on gas. A parent runs on coffee. America runs on Dunkin. A.Y. runs on hope.)

Though I hadn’t intended to be witty or humorous, he started to chuckle. Per usual, my straight-from-the hip relaying of my mindset came across as sarcasm or exaggerative commentary. But I was being honest. This is my truth. Much of my life, I’ve relied on hope. Hope for tomorrow. Hope to get me through.

That doesn’t mean I’ve just sat around and waited for ‘hope’ to make things happen or appear. I know life isn’t some magic show though there have been plenty of times the Universe has used slight-of-hand. A number of times I’ve gone from thinking and seeing one thing, to something else entirely. (Read “Everything was so good in the beginning.”)

The Universe can be a real dick sometimes. (I even have a pair of socks that agree).

When I was little, there were two main hopes: 1) to be a writer when I grew up and have my name splashed across books and 2) to fall in love and live happily ever after.

And yes, at the time, this was in the very serious Snow White, Cinderella, Sleeping Beauty, renditions of ‘happily ever after.’ But give me a break. I was five. WTF did I know? These seemed liked reasonable requests: Famous writer. Passionate, romantic love. (I wasn’t greedy and also ask to be beautiful.) What a full and happy life awaited me!

And the idea of falling in love and living a life happily ever after also changed, maybe more than the hope of writing. Each relationship I had gave me a different perspective on what ‘love’ and ‘ever after’ meant. And they were hard lessons to learn. I had to date all seven dwarfs (Cheaty, Codependenty, Crazy, Flip-floppy, Uncommitteably, Needy, and Unavailably) to get to a point of clarity and even then I got ‘it’ wrong and went about ‘it’ wrong.

What is also ironic is that with each relationship the hope to write felt further and further away.

I was not choosing relationships where my partner was comfortable, supportive, and/or confident enough to feel unthreatened by the power of my words or by me generally – being the kick-ass, boss-of-a-lady that I am. (It also probably didn’t help that I often said “It’s okay he’ll make me famous someday” when referring to the ex that came before them.) But being that I loved my boyfriends at the time I was with them, I always chose them over my writing. Essentially, choosing them over myself.

And a whole three years later after I finally disclosed the traumatic experience, my mother gave me this little book titled “Hope.” It was one of those little inspirational books filled with quotes that you find at the pharmacy. Eventually I passed it on to a friend who needed it. But for years I held on to that book. I don’t think my mother ever knew just what that meant to me. In my heart and mind I had always been one to hold on to hope when the Universe was dealing out some serious bullshit.

Hope was a part of my success plan. Part of my resiliency model. And there was this book from her: Hope. (And I don’t care what the most recent Mission Impossible movie said about hope not being a strategy. They are wrong.)

Flash forward and I had all the hopes for marriage. Then the hopes as a new mother and parent that I wouldn’t fail. There were instaneous hopes I had for my son and his life as soon as he was born. Two years after that and I relied on hope to make it through a devastating miscarriage. During this time, my sister gifted me a bear. Around it’s neck was a ribbon embroidered with “Hope.” For weeks, months maybe, I cuddled that bear. Squeezed my love and grief into it while listening to my toddler’s breath from the other room and feeling such a mix of emotions there are no words.

I have truly spent my life relying on hope to help me. I’ve attempted to adjust and alter my own behavior along the way, looking at every challenge for where I went wrong, what I could have done better, how I failed (myself or someone else). And so I tweak this or that, get up the next morning and go at it again, with hope.

(And with the help of my trusty Pinterest board, I have plenty of healthy doses of good ideas for when the Universe is being a dick and everything seems hopeless.)

When the Universe is pissing down on me, I just tilt my head back and laugh. “Is that all you got?!” When I’m feeling particularly sassy and defiant, I channel Bruce Willis from Die Hard and whisper a “Yippee kaya…” Because I know nothing will stop me.

The Universe can be a dick as much as it wants. I’ll always hold on to hope.

This is the second post in a series about the Universe. Here is the first.