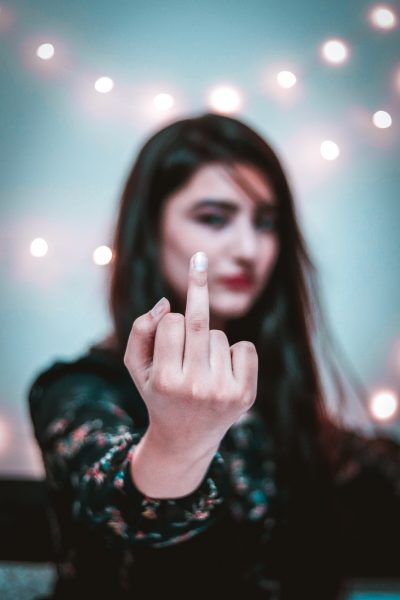 I’ve gotten heat that my use of the ‘F’ word will reflect poorly on me as a parent.

One argument was that anyone wanting to find fault with my parenting and therefore get in the way of my relationship with my son, might use my social media presence (which often includes my favorite expletive) against me in the court of law. At first I was stunned. Then fearful. Maybe they were on to something. Maybe my use of the ‘F’ word really was that powerful.

Anyone who tells you that your relationship with your child may be impacted by your own behavior is going to stop you dead in your tracks if you 1) are a people pleaser; 2) give a shit (see #1); and 3) desperately love your child. Most of us can’t stand to think we would ever do anything intentionally to harm our kid(s), or create unnecessary drama in their life.

Once I took a few deep breaths and sat with their well-intentioned-warnings, I realized this was absurd to me. My love and use of the ‘F’ word does not automatically determine my quality as a parent.

Most of us swear at one time or another. Whether it’s in writing (as in social media) or it’s out loud, a cuss word is a cuss word. People who hear it, hear it. People who are bothered by it, are bothered by it. Regardless of the form it comes in. If my entire self-representation (or mom-sona) ends up judged based off the frequency of my use of the’F’ word, than who has the problem really? That’s an awful lot of judgment coming from the nosebleed-section view of who I am. That is to say, if you’re making assumptions about how I am as a mom based ONLY off my social media presence, you don’t have a great seat in the grand show that is my entire life. You’re only catching parts and pieces and filling in a whole lot of gaps based off nothing.

I could be doing a lot worse things as a person or a parent than dropping the occasional ‘F’ bomb.

My child won’t be ripped from my arms or custody for the use of some profanity on my social media where they are not present and, even if they were, wouldn’t be able to read it anyway. Far wose could be happening than my exercising a foul mouth. What happened to the freedom of expression, anyway?

Plus, a lot of my use of the ‘F’ word has to do with emphasis or exaggeration of what usually – in my opinion – is a pretty damn good point. Not to mention, it’s usually connected to a social media account that is a part of my author platform.

“But can’t you make your point without using the ‘F’ word?”

But why the fuck does it matter? ‘F’ word or no ‘F’ word my point is the same. If you’re too hung up on the ‘F’ word then read without it; you’ll get the same message. Just omit it from the sentence. You’ll likely find that what I’m saying it just fine. It makes sense. Resonates with you. Makes you think. So who cares if the ‘F’ word is there or not.  I suppose if I’m making that point, you’re still wondering than why do I have to use it?

Because I like it. The ‘F’ word is versatile and fantastic. And I don’t see what the big fucking deal is.

If it was because of what I was actually saying that made people concerned, than I might consider their point a little more. But, if you’re actually reading for content, you’ll see that nothing I’m saying is harmful to anyone else, least of all my child. I’m not using the ‘F’ word to accuse, attack, defame, harass, or bully anyone else. There are no long sentences entirely full of expletives just for the sake of using them and with nothing real actually being said.

I’m using it as an adjective or an adverb. As an exclamation. Emphasis. I’m using it as verbal punctuation. And what am I usually talking about or sharing? Thoughts, feelings, and experiences about being a writer; about living a meaningful, real, and authentic life; and other random crap. When I post about being a writer and when I post about living a meaningful, and real, and authentic life, well that writer and person living that life is one who loves the ‘F’ word.

That’s real. That’s a part of who I am. I want my son to grow up with a mom who wasn’t afraid to be herself; who didn’t people please the hell out of everything; and who taught him to walk to his own beat regardless of what others had to say. I can’t teach him any of those things if I don’t practice them.

The part of the time that I’m blogging about being a mom (for the Burlington VT Mom’s blog), I’m not using any profanity. It’s against the rules. If it weren’t, I’d be swearing to “beat the band” because sometimes mom-life is so aggravating you want to just cuss ’til your out of breath. (Like when you’re being cautioned not to use the ‘F’ word because it might make you look like a bad mom. Like, seriously, moms get way too much judgment.) Sometimes mom life makes you want to scream and shout and drop a whole arsenal of ‘F’ bombs all over everything. Why? Because it’s cathartic and you know a whole slew of other moms who are feeling the EXACT same way.

If I’m going to be judged as a mom, I would like that judgment to be weighed in a balanced manner.

You want to toss the use of profanity on the negative side of the scale than fine. But why don’t you have a look at all the good things I actually do (or attempt to) and all the great ways I behave as a mom and see how everything adds up at the end. If you read my posts over on the moms’ blog, you’ll see the mom I really am. You want to know about the rest of me, the other parts of me, than you can read from this blog. The one with a lot of swearing.

Now, I know you’re thinking like, “Man. She’s hating on these concerned people who gave her the heads up.”

Fact is, I’m not. They were truthfully trying to look out for me. They don’t want me to be judged. Perceived wrongfully. Or my words to be misconstrued or tossed back in my face. They don’t want to see me heartbroken if somehow my online presence negatively impacted my relationship with my child. I respect them for being in touch and being honest about their concerns.

But I’m not okay with watering myself down or trying to keep myself small because of the likelihood that somewhere along the way I’ll piss someone off. Or someone will think lesser of me. Screw them. That’s their issue.

I know you can’t please everyone. At some point someone will hear whatever it is they want to. I know that you can’t be real with yourself or anyone else if you constantly worry about what others think and just play to their tastes. And I know if I start to change now, if I start to overanalyze every single time I put myself out there what others are going to do or say, I’ll stay hidden, small, unempowered, and static the rest of my life. Fuck that.

I’m going after my dreams. I’m going after an authentic life, purposefully – with intention and consideration. There’s no recklessness even if some are jarred by the ‘F’ word. I resent anyone thinking that I’m not putting my son first in everything I do and making up ridiculous arguments that my use of the ‘F’ word suggest otherwise.

My very decision to go after the dream to be a writer, which includes having an online presence, is because I want to make him proud. I want to teach him to be himself. To go after his own dreams. And to live an authentic life.

I want to show him that anything is possible when you work hard and go after it.  If he grows up and wants to focus in the arts, it can be a life and livelihood if he chooses. I want him to learn that living isn’t about always playing it safe or doing what everyone around you wants or believes is the expectation. He has my permission to beat his own drum, forge his own path, and not worry constantly about how others see him.

Everything I do now is all for him more than it is for me. There is a small person to hold me accountable even when he doesn’t know he is. When he’s old enough to ask me, “Mom, when you were little, what did you think you wanted to be when you grew up?” I want to be able to look at him and say, “I’m doing it. And you can be whatever you want to be, too.” Even if “it” isn’t writing but instead is becoming a person who is real and lives based on her own intuition versus others’ definitions and expecations, I’ll feel that I’ve done what I should as a mom. I’ve lead by example.

You can tell me that all they wanted me to do was consider not using the ‘F’ word when I write, post, express myself.

That really it was a small thing they were trying to suggest. But it’s not. Not to me. Telling me to consider watching what I say, how I say it, where I say it, and pairing that with how I might be perceived and how it might impact my parenting and relationship with my son is a whole lot bigger than someone just saying “ease up on the ‘F’ word.”

They’re asking me to redetermine my way of expression based on a fear; based on the opinions of people I do or don’t know and who do or don’t know me; on hypothetical and somewhat unlikely scenarios of my child being taken from me because I swear; or on the unrealistic expectation that I could ever control how another person perceives me (with or without the use of expletives).

People will read what they read. See what they see. Hear what they hear. I may put out the words and the message, but I have no control over what they get or take away. Or choose to focus on.

So I use the ‘F’ word. Big fucking deal. A lot of people do. It doesn’t make me a bad person or mom. It makes me real. If there is anything I would want to be more than a writer it’s that. I want to be real. First and foremost for my son. Then for me.

As for everyone else: you can take me or leave me as I am. That’s completely on you. Want to think I’m a bad mom, go for it, and consider yourself lucky that I’m not yours. I’m sure as horrible as I am, I would really fuck you up.

THIS IS THE SECOND FUCKING POST IN A SERIES ABOUT THE ‘F’ WORD. WHY? BECAUSE I FUCKING SAID SO. HERE’S THE FIRST IN CASE YOU MISSED IT.