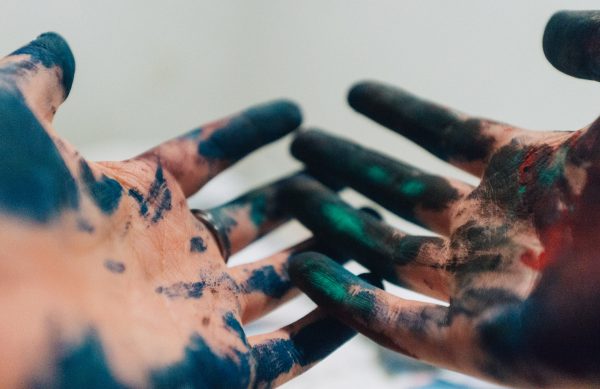 On the occasion that I have twentyish minutes in the car on my own and that I want to make those twentyish minutes productive – and by productive, I mean, not let my mind wander all over the spaghetti-noodle-looking map of my mind. Sometimes I tune into a podcast called Helping Writers Become Authors with K.M. Weiland. I’m still not sure if I-love-it-can’t-live-without-it, but I don’t hate it.

I have to admit, each time I’ve tuned-into an episode, I have gained at least one thing that I’ve written down; stopped and considered, or that had me head-nodding-in-agreement. So even if I don’t want to marry it or write it into the acknowledgment section of my book, the fact I’m writing a post about it should say that it is beneficial and I’m actively listening and engaged. (In short, other writers, it’s worth a listen.)

The other day, I tuned into an episode called Learn 5 Ways to Take Risks With Your Writing.  Now, I couldn’t repeat back to you in a bulleted form what all five were because I got fixated on one. One spoke volumes to me (book pun intended). Then I drowned out the other four.

One of the risks was to be honest with yourself and in your writing. Specifically, Weiland said, “Art that is safe doesn’t really matter.” I boiled this down to facing fear.

To me, safety is the opposite of fear and fear has been a huge force keeping me from reaching my fullest potential and possibilities as a writer. There was a fear of writing. Period. That nagging voice asking me if I had anything worthy to say was driven by fear that maybe I didn’t. Maybe there was nothing I could offer readers. My voice wouldn’t be distinct. My ideas and opinions not unique enough to be interesting. No one would like my style. No would be waiting on the other side for me to finally make it. It was easier to keep dreaming of writing. Dreaming of writing is safe. Writing is terrifying.

Writing is stripping down naked in front of crowds of people even if that crowd is in the comfort of their own homes.

When considering whether I should write under my own name or a pen name, fear was driving the entire inner dialogue. Fear was telling me I might hurt someone, I might say too much, I might tell it wrong, I might embarrass someone, I might expose too much of myself. Writing under a pen name would be safer. Except I realized that was bullshit. It was a lie I was telling myself. A pen name was no perfect solution either especially in a small town (small state). Someone would know me by pen name and real name. Someone would let that cat out of the bag. Eventually, I would be realized anyway. Then what?

The only solution was facing fear. “Write under your own name,” I told myself.  Once I made the decision A.Y. Berthiaume was born.

Now, as I work on my memoir (for the third time), I realize that fear bubbles under the surface. It lurks in the shadows of each line I write as I get closer and closer to writing about some incredibly difficult shit. The more this story comes to life on the page, the more I fear what success (or failure) might bring with it – exposure; interaction with the past; hurting others. Fear tells me I should write something else. Not writing the book would be safer. Then I remember I’m already writing and sharing parts of this personal narrative. See this and this. In doing so, I’ve already thrown on my armor and braced myself for the impact.

Each time one of my posts goes live here or elsewhere, I realize I’m facing fear and speaking my truth.

I’ve feared writing, writing under my own name, and writing a particular story. All of these are critical to validating my experiences and honoring my identity. Forever I have considered writing my calling and purpose, but I’ve avoided it in various ways over time. I’ve sat in the margins of my own story from a safe distance.

Within this last year, I reached the point where I was tired of sitting around, thinking of what it might be like to capture the dream I’ve had since I could even say the word ‘write.’ I started taking myself seriously. I started making my lifestyle a writing lifestyle.  I started to show up to my own dream. My own ambitions. I started to make shit happen and I started to say ‘fuck it’ to the fear and to the safety.

You have all been witness to my owning my fears, facing them and moving toward my dream of the writer’s life.

If I had chosen not to write because it was safer not to, I would have become a depressed, resentful, bitter, old asshole. If I had chosen to write under some other name it would have made me feel less authentic and shameful about what I was writing. Using some made up name, to me would have been a signal that I was somehow embarrassed by the thing I had just worked tirelessly to produce. Some other name may have offered the illusion of safety but I’d still be an asshole. And hate my self.

If I chose to ignore the calling that the stories from my life have a purpose in being shared – as terrifying and risky as they are to write – am I not just saying that everything I may have experienced is irrelevant and lacks purpose? Have I not just wasted a gift I’ve been given?

A gift of being able to weave words and spin stories to shed light on universal truths that could be serving to others. Being safe in choosing some other story to tell, some other book to write might come out being terrible and then where would I be in my writer’s journey? If you don’t write from some place of your own truth, what quality of work then do you offer? What message or truth do you actually afford to readers? Is it one that actually resonates with them? Lands between their ears and gives them that great ‘aha’ moment? I’d bet not.