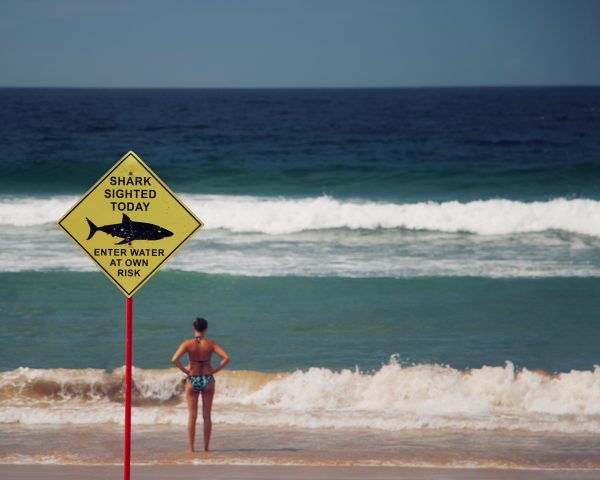 Like everyone, there are things that scare me. Some shit that downright terrifies me. We call that Fear and Fear is kind of a dickhead.

He knows what he’s doing. Getting into your head and under your skin and hoping he’ll keep you from moving forward or chasing a dream or seizing an opportunity. Fear is a real piece of work.  Sometimes Fear is all in our head, based off a faulty feeling or thought, or an overactive imagination. Sometimes Fear comes in the form of something real and scary. And sometimes those very real and scary things are extra scary because the results of an encounter with one of those very real and scary things might mean sudden or immediate death which could also be a fear.

Here is my perfect and very real example: sharks and snakes terrify me and death is also one of my fears (and also no laughing matter) which makes the fear of sharks and snakes extra intense because an encounter with either could mean death.

See what I mean?

So where did I develop such intense fear of any of these? Well, I cannot explain my fear of death. Isn’t that just a part of the human condition…? But sharks and snakes, I think I’ve got a handle on.

My fear of sharks came from the movie Jaws which I saw the first time as a very young child from behind the chair of one of my parents. I had snuck out of my room after bedtime to watch whatever it was they were. So terrified I was of Jaws that when I found out we were going to visit Universal Studios during a trip to California (I was twelve), I was anxious for days before. There was a Jaws ride marketed as having the actual mechanical shark they used to film the movie. This was terrifying to me!

My Jaws fear on this trip was further complicated by the fact that one of the people we would be visiting while in California had a python cohabiting their space. The python belonged to her roommate.

Since I was born they have terrified me. I cannot figure out where this fear came from, but it has always been there. Clearly I got some kind of ‘snake-fearing’ gene. I don’t remember any bad experiences with snakes. Well no living, breathing ones. I have plenty of bad experiences with nightmare-snakes. One time, a snake bit me in a dream and my whole body went numb from the neck down. I woke up instantly, but I was stiff and couldn’t move. The nightmare-snake physically impacted me in the real world.

See, fear is a dickhead.

I’m now in my thirties and even seeing snakes in movies forces me to close my eyes. I’ve seen Harry Potter Chamber of Secrets I don’t know how many times, and the first time the basilisk appears on screen, I still jump.

So back to this trip to California.

First. I went on the Jaws ride despite being teary about the entire thing and I sat as close to the middle of the seat on the dinky boat as I could. I tried not to look. It still scared the shit out of me when it popped out of the water. Except when it did, it was a dwarfed shark. I mean it was not the Jaws from the movie whose head took up the entire TV and whose mouth you could peer inside and count the rows of teeth.  It was not able to swallow me whole if I fell towards it. And if I fell out of the boat into the body of water this ride moved over, I could swim to shore as well as easily beat up the mechanical shark dummy. I learned the power of special effects that day.

Do I now watch Jaws when it comes on for the movie marathon at Thanksgiving time – which I have never understood – fuck no.

Second. When we visited that person’s house who had the python-roommate, that python never came out. Still, I stayed routed to the couch, feet up off the floor the entire time. Additionally, I refused any attempt by our host to meet it in efforts to get over my fear of snakes in general. No fucking thank you. That’s a python!

The irony of these fears?

I chose to study abroad  in Australia.

What was I thinking?

But, nevertheless, I go to Australia…

One day I went to the beach. I got pulled by the rip tide; I panicked and in panicking was dragged further and further out. All I could think about was being eaten by a shark. The next time I went to the beach, I had no near-death, rip tide experiences, but the next day, the whole beach was shut down. Why? Because a herd of Bull Sharks came too close to the shore. That was it. Beach days were over for me.

(I also declined any chance at surfing lessons. Why? I was too terrified that being on my belly on the board with my hands and feet dangling over the side, would mean I looked like a delicious seal. The sharks obviously swimming beneath me and hungry would love a plump, juicy seal for a meal. No thank you! I want to live!)

At some point in the semester, I forced myself to go on a 4-day adventure out on the Great Barrier Reef to snorkel and dive. I passed on the diving as I couldn’t bring myself to do it. The probability of seeing a shark at xx number of feet below water seemed high. But I did brave getting off the boat and going out into open water to snorkel.

Except as soon as I was out there, unable to see land anywhere in sight and the water so black you couldn’t see your feet beneath you, I panicked. I may have been in the water for thirty seconds before they had to pull me back onto the boat. From then on, I stayed close to the shores where we docked to snorkel. No more open water for me.

The crew teased me about sharks the entire time I was on this Reef adventure. As though sharks weren’t bad enough, they told me there were gigantic water snakes in the ocean to be on the lookout for. (I’ve never Googled to determine if that is true. I’m too terrified that if I do, images will be pop up first. Those alone will have me wetting myself instantaneously. Again, no fucking thank you.) I believed them because it’s Australia and why the fuck not? Sure, gigantic water snakes.

In the first few days there, I decided to go on a day trip into the rain forest with other study abroad students. I chose to believe that everything would be fine in a big group. Except on the way there, they talked about the snakes. They talked about the safety measures. At. Length. I was like “I’m not in Kansas anymore.” These big ass snakes don’t give a shit if they hear you coming. Sure, let your feet stomping through the rain forest send out vibrations to let them know you’re nearby, but even if they head in the opposite direction, you might see them. They are huge and long and CAN. EAT. YOU. What was I thinking? But I couldn’t be the fearful loser who sat on the bus after we arrived. So I forced myself out with everyone else. Luckily, I was so overwhelmed by the intensity and beauty of the rain forest, I didn’t think as much about what may be lurking nearby.

PANIC was setting in!

But I’m a “freezer” in the face of danger. Screw flight or fight; I freeze. So at first, I was able to follow his instructions.

And then he advised we not look. Now, telling anyone to ‘not’ do something produces one result – do the very thing you’ve been told not to. I’m not alone in this. I’m human. So we inch our way up the path and I’m thinking these last one hundred yards are the longest ever. And I’m trying so hard to stay calm and walk slow and not look but like everyone else ahead of me, I turn my head to the right. There beneath the brush was the pointed end of this long, black, leathery, scaly tail.

And freeze no more. I was out of there!

Thank God the end of the trail was just a few steps ahead. It brought us out to an overlook. Rain forest spread for miles and miles. Heart pounding in my ears, I leaned up against the concrete half-wall, a perfect picture spot for any visitor. I closed my eyes, breathed in, bent my head down. Then opened my eyes.

It is a wonder I didn’t have a heart attack right there. I got on the bus. That trip was over for me. (Technically it was over-over, in the official sense since we were going back to campus, but I was “over it” in every other way.)

I just wanted to live! Not die in the rain forest with a bunch of people I had barely met.

Moral of the story:

Fear is a dickhead, but does have the ability to create some good stories (as much as also being able to give you terrible flashbacks).

Some fears you never get over. However, do attempt bravery and perseverance, so you don’t miss out on cool opportunities (like snorkeling, seeing the Barrier Reef, and walking through the rain forest. Or just travelling in general). You have to keep going in spite of fear.

Now I recognize I used two very easily-avoidable, lots-of-other-people-are-also-terrified-of-these-animals examples of fear. But who wants to hear about my others really?

No one is going to laugh or feel uplifted by a post about why I fear death. It’s pretty hard to make light of death, except for when you’re placing it against also being scared of sharks and snakes. Death by itself isn’t that funny.

So for today it’s snakes and sharks and facing your fears in places like California and Australia and hoping it all works out and you don’t die. (Plus I just got done writing an entire deeply felt and serious series about women’s weekend and I just needed to lighten it up. Lighten it up with some good ole’ deadly snakes and sharks. You feel me?)

Also the writing prompt that inspired this post was: fear of the unknown. Notice how I didn’t actually write about the unknown. Unless you consider that to be death. In which case, that fits. And I’m awarded 500 points. Why? Cause it’s my blog and I make the rules.

2 thoughts on “Sharks and Snakes Terrify Me, Death Isn’t Funny, and Also Fear is a Dickhead”