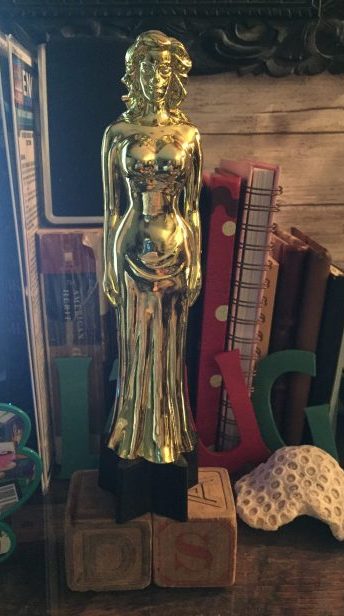 Over brunch with my web-guy one day, around the time I launched my site, I told him I would pay him back for his work (which he graciously did for free) when I was BIG Famous.

The words just kind of came out before I had even given them much thought. (And now I love to use them whenever I can. I love the two words together: BIG. Famous.)

This was a fair question. One that I didn’t wait for a second to answer.

“Going on The Ellen Degeneres Show. Being on the Oprah’s Book Club list. Having a movie made based off the book. Getting to meet J.K. Rowling –”

(Note: I don’t write anything like J.K. Rowling, topically or stylistically, but if you’re BIG Famous you can meet whatever literary giant you want. K?)

I continued. “– Hitting the New York Times Bestselling List. Buying a dream house. Going on a book tour. Having a book printed in multiple languages and distributed worldwide.”

He laughed. Not because he didn’t believe me or in me, but the enthusiasm and speed at which I delivered my response caught him off guard.

Yes, I’ve been thinking about this for a long time.

“Yes, I’ve been thinking about this a long time,” I also said out loud. “But I’ll settle for Small Famous, too.”

“That’s it?” he asked, shocked that my ‘small’ was sooo small in comparison to my very BIG response for the former.

“Well. Being published. One book will do.” I added.

I nodded and ate more eggs.

Seriously, I’ve been thinking about being a published author since I was five. And it’s always felt so much more like a dream rather than a reality.

Even now while I work every day towards it. If I could get just one book published – regardless of length or genre – I would consider myself Small Famous. I would consider it a dream reached. A goal surmounted. And the ‘local notoriety’ of this particular type of ‘famous’ would be my circle of family and friends. Would Small Famous from one book be lucrative? Likely not.

I’m not trying to shoot myself down. I’m just being realistic. I learned recently that about 80% of books published within the year flop on a profit and loss scale. And that no one can really predict the next best seller no matter how long they’ve been in the industry or how many people they’ve represented or published. I chalk this up to the fact that the writing world is a very subjective place. It’s about who likes it and responds to it. And you fight that battle from the time you’re trying to land an agent to the time your book is in people’s hands.

Some will love it, some will hate it and the ratio of those are unknown at first.

Though some find this picture bleak, to me it’s just knowing and understanding the business and not letting it stop you. If you are called to tell a story, you tell it, regardless of the (unpredictable) success rate. As a writer, you write. Once the piece is written, it becomes the world’s and may or may not be liked or lucrative. So if BIG Famous is all the things I mentioned above but the reality is that 80% of books will fail, I’ve only got a 20% chance of success and success won’t necessarily mean any of the things I described. Though I hate math, this equation tells a pretty specific tale.

I find that knowing the reality of the industry and the field I’m choosing to be in, helps in keeping me honest and my expectations realistic. And so while getting to BIG Famous would be tremendous and while I know exactly how I choose to define that, I’m happy to begin at Small. I’m happy to be anywhere close to Small Famous.

Small Famous would be enough. I could say “I did it!” “I got here.” “I reached my stars.” I would have so much pride in telling the story (to anyone who would listen) that I said as a little girl I would grow up to be an author and I did. That would be enough.

Now, of course, I say that now. I say that without having a book published yet. I say that without really knowing what it will feel like to get that first one through the publishing gates and into the hands of readers. It is possible that I’ll soon learn that one is not enough. And I hope that is the case. Because if it is then it means I’ve had an amazing experience doing something I’ve always loved and felt called to do. It would be heartbreaking to have such a lousy experience that I became entirely disenchanted with becoming an author after all these years dreaming of being one. Consequently, I would stop after one book.

No. I like to think that getting the first one published means it’s exactly that. The first. The implication being there is a second. And a third. While reaching BIG Famous would still be a bonus if it happened, what I would strive for after Small Famous would be Comfortable Famous.

Comfortable Famous is that local notoriety going outside of family and friends. It may include a statewide tour or speaking-circuit. But ultimately, for me, Comfortable Famous, is making my living writing stories and sharing them with the world. Comfortable Famous means being able to financially support myself and my son. And, if really Comfortable, it would mean being able to help out family or friends in need or spend a little extra to go on a trip or do something extra special.

Small Famous, Comfortable Famous, and BIG Famous are on a spectrum.

One that spreads wide. There are several little stops between each milestone. But I’m hopeful with each stop along the way, it boosts my confidence and confirms that I’m doing what I’m meant to do, doing it the right way, and am going to get there. And there is the next little rung on the ladder. I’m going to focus on the step I’m on. Make it count. Make it the best step ever. And see how it launches me to the next.

First step coming up, Small Famous. That is the first destination. That is the first measure of my writing success. And it will be one step closer to BIG Famous. (When I’ll finally be able to pay my web-guy back and reflect on that brunch conversation with pride and laughter as I sign him a BIG fat check.)