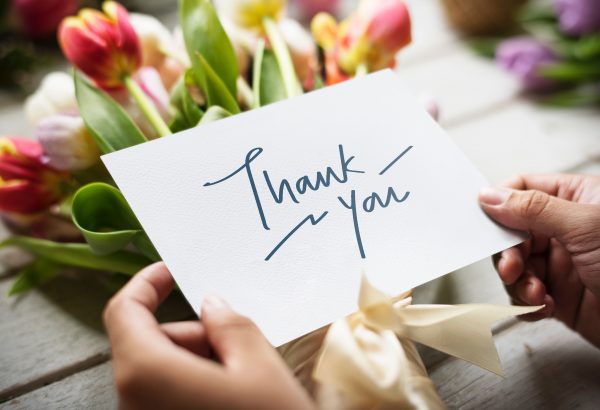 Lying down on the cool grass, looking at the clouds I realized that the Universe isn’t always a dick. Sometimes the Universe grants blessings.

I know I’ve said the Universe is a dick on more than one occasion but that is a lie. Mostly. As is the first sentence of this post. I was not lying down on the cool grass looking at the clouds when I realized this. In truth, I was washing dishes. I was washing dishes, staring at a white wall – white resembles clouds … Okay, I’m stretching to make this whole clouds thing work, but looking at clouds seems a more romantic way of thinking about life than scrubbing dinner off plates.

So, I was washing dishes and thinking about a variety of things happening in my life and recognizing the places where instead of the Universe being a real tool (and not in the great sense of the word), it was actually being pretty badass (like fairy Godmother meets a superhero).

Thinking about my life in its entirety, and really I have to say the Universe has lent me a hand.

It’s given me a lot. It’s provided me privileges that many other have not been given. My conclusion, the Universe grants blessings maybe more than heartache. Depends on who you are I guess. Someone else writing this post may say, “Nah, that Universe is a real piece of shit.” And someone else may say, “The Universe is my homeboy.” I don’t know either of those people.

(This is an aside: Yes, I’m saying on one end of the good-versus-evil spectrum of the Universe there is the Universe lending a hand and on the other end the Universe is being a dick. And I’m sure there is a saying about a dick in the hand is worth more than two in the bush, or something crass and fucking hilarious at the same time, but that is not where this is going. So when you’re done gaffawing at your computer or mobile device and your cat is no longer staring at you like you’ve lost your mind, keep reading. Oh, and please don’t Google ‘dick in the hand is worth…’ I’m sure that will lead nowhere you want to be. If it does? No judgment here, but please don’t tell me about it.)

Back to the Universe being one of the good ‘guys.’

The Universe has always provided me my basic needs: food, water, shelter, clothing. It has blessed with me loving and supportive family and friends; a beautiful and healthy son; a healthy and abled body; a sound and gifted (not in the MENSA sense of the word) mind. Well beyond the requirements for a successful life, the Universe has also offered the opportunities of education, travel, full-time employment (with benefits); among many others. None of these things are perfect. None of these things have come without challenges. Sometimes not all of these things have aligned — when one thing is working another might not be. But there is a difference between not working/challenging and non-existent or absent all together.

When I think about all of these things, I look back on the moments where the Universe was a real dick and realize that those harder (or more tragic) life moments were endurable because of all of the other things in my life the Universe was allowing to go right. People have called me resilient and persevering and strong when they hear about certain experiences I’ve had. I’m not saying that I’m not. But maybe this is an exaggeration? Just like my calling the Universe a dick as if that were its only characteristic. How minimizing and inaccurate would it be for something as powerful as the Universe to be described as only male genitalia.

If I was the Universe I would hate me for being so mean in my characterization and judgment. Especially after I had granted me so many blessings.

(Guess that kind of makes me the dick in that instance, right?)

Back to my point. Maybe I’m only resilient and persevering because stuff hasn’t really been that hard. I mean it certainly didn’t feel that way when I was going through some real shit.  But maybe I wouldn’t have had the same fighting spirit in the face of those episodes if my basic needs weren’t met. If I didn’t have the support system I do. If I wasn’t educated or employed, healthy, or sane.

I’m not trying to put myself down or discredit anything I’ve achieved or succeeded or survived through. But I’m also not a hero. I mean, no one has called me a hero, so that is a strong word, but hopefully you get what I’m driving at here. If the Universe had offered me nothing and then also poured a big pile o’ shit on my head, maybe I wouldn’t have come out on top. Or maybe I would have and that would have been more impressive.

Nothing is every completely bad/evil or completely good/angelic. Nothing is ever all or nothing. I see the world in shades of grays. The only thing to me that is black and white is math. There is a right answer and a wrong answer to equations. But who the fuck cares about math. Not I. (Unless it comes in the form of ‘this royalty check for your bestselling book’ + ‘this royalty check’ = comfortably living the rest of your life and paying off your student loans.)

My point is, it’s unfair and inaccurate for me to continuously paint the Universe as a dick and only that. The Universe grants blessings and I am grateful.

So why then have I gotten into the habit of picking on the poor Universe who has been so good to me? Because that shit is funny. Exaggeration is funny. It’s storytelling. It’s my style. And because people, as sad as it is, want to read about how people have suffered and overcame. They want to cheer for the underdog. Want to watch the person rise from the ashes. See the weak fight back and win.

Readers want Angela’s Ashes and The Glass Castle and Eat, Pray, Love and all that misery and heartache that comes with those stories because those stories are real life. It’s looking at the good AND the bad of that which the Universe flings your way.

If I say ‘the Universe is a dick’ you stop and pay attention. If I say ‘the Universe was so nice to me today’ you’re like ‘boring’ (insert eye roll) and you move on. Like pretty sure you only stopped and took notice of this post because DICK was in the middle of the title. (Also possible you saw me plaster it across all my social media and were like, “Fine, I’ll read it already. But please stop talking about it. Gawwd.”

Okay. So let’s be clear. I love the Universe. In my heart.

And consciously I’m aware that it’s not all bad and that it’s done some amazing things for me. But I’m going to continue to call it a dick if it’s warranted. Because ‘dick’ sells. I mean that literally and figuratively.  Admittedly, I’m not always happy about that, but that is a separate post for another time.

P.S. All of the memoirs listed in the second-to-last paragraph have been turned into motion pictures. So not only do people want to read about other people’s misery but they also want to see it on the big screen. Just saying.

P.S.S. (or P.P.S?) This is a final aside, going back to that hero bit. I would love to be a superhero. Something on par with Superman so that we could fall in love and make sweet super babies with great senses of humor and love for the written word. If you’re wondering what Superman has to do with writing or words then maybe you should Google ‘Clark Kent’ and ‘The Daily Planet’ and put that shit together. And then don’t come back to my blog because I’m really disappointed in you for not getting that reference. If you’re wondering about the sense of humor than you should leave my blog anyway because you clearly don’t understand where our hypothetical super baby would be getting their humor from…. Hello, you’re looking at her.)

1 thought on “I Admit It. The Big U Isn’t Always a Dick. Sometimes the Universe Grants Blessings”