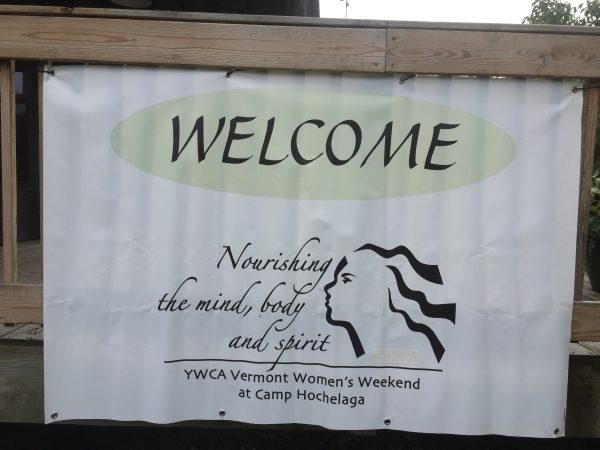 This is the first post in a series of reflections about attending YWCA VT Women’s Weekend.

2017 was a terrible year. Liken to a country music song or Lifetime movie except no one ended up in jail. Just about everything else happened.

I had a miscarriage. My marriage fell apart and resulted in divorce. As such, my time with my son was halved (as we agreed to a 50-50 custody). My grandfather passed away. I had to live with my parents for half the year which doubled my commute. We sold the house. We had to decide to split the pets, so I lost the dog. Somewhere in the third quarter, my GI system went into disarray which I thought was stress-related, but turned out I was really a (new) member of the gluten-sensitivity party (yes, a real thing and not just some food trend). The promotion at work I was promised failed to happen. I’m surprised I didn’t lose more hair, but I did lose a lot of weight. (People tell me that’s the “divorce diet.” I think that is stupid. You’re not dieting. You’re really fucking stressed and depressed.)

Somewhere along the way, I began seeing a therapist. In July she suggested I find something novel to do that would be restorative and specifically for me. Like a normal person, I took to Google and typed in “stuff to do + VT + August 2017” and waited for results. The first thing that popped up was YWCA VT Women’s Weekend. I clicked on the link. The schedule looked amazing, including a keynote by Debby Irving who wrote Waking Up White. I didn’t know anything about this author or this book, but it had been a long time since I engaged in my women’s studies/feminist passions and mindset. Wasting no time, I signed up. 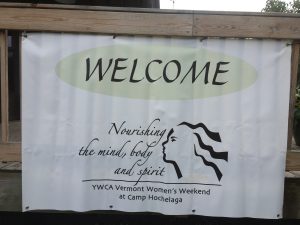 Within a day or two of registering, I received a welcome email from YWCA VT Women’s Weekend. Under the signature line was a name I recognized. It was a sign!

In my first job out of grad school, my paths had crossed with this woman, Joanna. Joanna was teaching health education in Milton and I was a technology-safety instructor for a local nonprofit, travelling the state offering presentations to students, teachers, and parents. Over the year or so I was doing this, Joanna invited me to her school multiple times to speak to the students in her class. She and I hit if off instantly; birds of a feather.

As life goes, each of us made career changes. Our paths hadn’t crossed until that welcome email came. Remembering how fond I had been of Joanna personally and professionally, I knew that if she was in charge of YWCA VT Women’s Weekend than it was going to be amazing. It was a sign that I was doing exactly what I should be.

Leading up to the weekend, I was a little nervous. Would I hit it off with other women? How much would I reveal about where I was in life? I had never been to a camp as a little girl. The closest thing to several days with only women was attending Girls State in high school. While I look back on that experience fondly, it wasn’t much to really compare.

I was now in my thirties, feeling completely depleted, totally unfamiliar with myself, and placing myself in an adult women’s camp.

Before getting married I had done tons of things on my own with little fear, including travelling across the world for a semester abroad in Australia with NO ONE from my school. Truthfully, I knew no one and had never been outside of the country (albeit Canada). A camp in South Hero should be peanuts in comparison, yet I was nervous, vulnerable, and uncertain.

As soon as I arrived at YWCA VT Women’s Weekend I knew I was right where I belonged. That feeling of being where I should be strong and flowing.

I was blessed to have a cabin-mate (shout-out to you Sam!) that totally spoke my language immediately. In fact, she’s now one reason I’ll attend every year, because it will give me a chance for face-time with her. Female friendships are so important. Sam and I hit it off but without the pressure or expectation that we should spend the rest of our time together. There was no clinging to each other because we each had come alone and knew no one else. Unlike middle or high school where sometimes you feel like you can only have one best friend at a time, we each met other people and explored the sessions that individually spoke to us. Our bond was made in the space in between.

The keynote presentation Friday night during dinner, turned into open dialogues with people at our table about how to talk about race. These conversations were intense, but invigorating. I couldn’t remember the last time I had engaged in any kind of intentional discourse about race.

Just sitting and having meaningful and deep dialogues about real current issues felt like I had been called home.

Throughout the weekend there was a lot of laughter. Who knew how hilarious Bingo could be with the right people, wine, and chocolate. And at several points throughout the weekend, I realized that I was the one making people laugh. It seemed I had forgotten the sound of my own sarcasm and wit, my own ability to offer a remark, opinion, or story with flare, humor, and honesty.

There was R&R, there were arts and crafts. There was being outside, seeing the lake and mountains, feeling and hearing the breeze, gathering around the camp fire, looking up at the stars. The only outlets for your phone were in the bath houses or the lodge. The cabins and tents had no lights, no electricity. It was being a minimalist for the weekend, including no urgency to shower, shave your legs, or do your makeup.

Restoration came through the simplicity of the quarters, the lack of pressure to be “girly,” and being hunkered away in beautiful, natural surroundings. Not to mention the people and programming.

I heard amazing stories and met phenomenal people. People that thought and felt about things the same way I did. Just like that, in a few days time, new friendships and bonds were formed (one that piqued after camp and turned into something huge). There was no real telling who I might stay in contact with after YWCA VT Women’s Weekend was over. The fact that I made friends was a bonus. Truthfully, I had gone to become friends with myself. To relearn who I was at the core. I wanted to care for myself and offer my spirit a chance to be nurtured, to heal, and to be loved – not by others, but by myself. This what I had really set out to do. Everything else was icing.

At the end of YWCA VT Women’s Weekend we were invited to write about our experience using one of two prompts. One prompt was asking us to write about what we would do after we returned from camp to support our self at work or at home. The other asked about an unforgettable moment. I chose to write about a feeling. 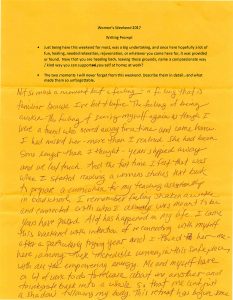 This is what I wrote:

Not so much a moment but a feeling – a feeling that is familiar because I’ve felt it before. The feeling of being awaken. The feeling of seeing myself again as though I were a friend who moved away for a time and came home.

I had missed her more than I realized. She had been gone longer than I thought. Years slipped away and we lost touch. The first time I felt that was when I started reading a Women’s Studies text book to prepare a teaching curriculum for my teaching assistantship in grad school. I remember feeling shaken awake and connected with who I always was meant to be.

Years have passed. A lot has happened in my life. I came this weekend with the intention of reconnecting with myself after a particularly trying year and I found her -me – among these incredible women, in this safe place, with all the empowering energy. Me and myself have a lot of work to do to relearn about one another and to integrate back into a whole. I no longer want ‘me’ to be a shadow following my body. This retreat has begun some very important self-work, self-care, and healing.

YWCA VT Women’s Weekend was more than just a good time with a bunch of amazing women in an amazing place. The weekend was restorative, awakening, healing, nourishing. All of the things it promised it would be and then some. This is why I’ll go back year after year. It’s why I attended again not that many weekends ago.

I need this weekend for my soul, my spirit, my being.

Everything needs maintenance and upkeep in order to continue to operate at full capacity. This weekend has become my yearly tune-up. My new annual tradition for myself because I matter. Regardless if the year is terrible or it’s terrific, I’ll be there, standing hand-in-hand with other women who believe in the restorative powers of just being present with yourself and other like-minded, amazing women. Empowered women, empower women and that is one of the most beautiful parts of attending YWCA VT Women’s Weekend.

Please stop crying. Unless these are happy tears. If so, please continue…

Thank you for all the incredible and amazing work you do to make this restorative and nourishing weekend possible. In 2017, it was exactly what I needed and helped me set intentions for 2018 that have been empowering and life changing. I owe you so much thanks for that singular experience. This year’s experience was just as inspiring, uplifting, and meaningful. Keep throwing your sparkle around; you make everyone and everything you touch shine.