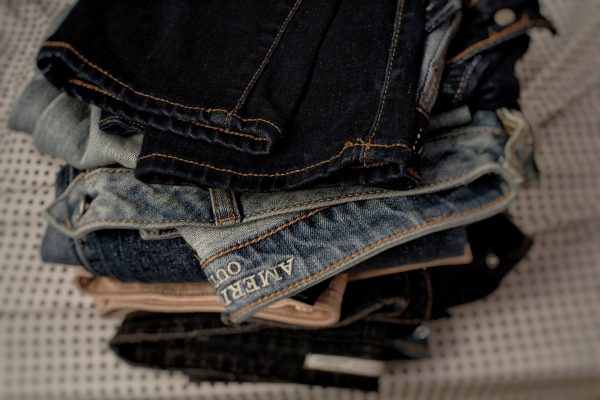 Inside my zipper I discovered a patch. Not that kind of patch either. (You’re dirty-minded, aren’t you?) It’s a patch of fabric running vertical that says “lucky you.”

Now, I bought these jeans over a year ago. Since I bought them, I’ve worn them at least twice a week. With all that wearing, all the times I have put them on and taken them off; pulled them down to go to the bathroom and then back up; thrown them in the wash or folded them out of the dryer; never have I noticed this patch.

Yes, I discovered this patch of fabric hidden inside my zipper for the first time a year later while on the toilet.

At first I only saw the ‘lucky’ and I thought, “Hmm.. did I buy brand jeans and not realize it?” It doesn’t matter whether I did or didn’t, but I don’t typically buy brand anything. At least not consciously. Most of my clothes I buy at TJ Maxx, and while these things can be brand-named, I go there for the deals, not for the brands. So when I picked these out and tried them on, it was because of how they fit and what they cost, not because of anything else. And nowhere on them did I see anything indicating a brand.

So, I’m thinking, well that’s a sneaky and weird place to brand something.

Wouldn’t you want your brand to be known? Placed somewhere for others to see, which I thought was the point. But, hey, why brand a back pocket where people can see it when you can cleverly place it in the crotch-area to be your dirty little secret. I mean, nothing gives me more pleasure than unzipping my own pants and feeling that gratification that I bought Lucky jeans. (And I don’t mean ‘lucky’ in the winning the lottery or finding a magic lamp, kind of way.)

The thing is, after cycling through my ideas on branding, I realized that ‘lucky’ isn’t the only word. I realized that if I pulled back the zipper more, it says “lucky you.”

Lucky me that I could unzip my own pants? (Thank you abled-bodied-ness.)

Lucky me, I discovered this patch after all this time? (And am now finding humor in it.)

Lucky me, the zipper isn’t stuck or broken and I have to go back to work with my fly undone? (This has happened and it’s not that funny.)

Lucky me, I’m spending a lot of time wondering about this mysterious patch? (Which is evidence of a sound mind … maybe. You can argue that either way.)

Lucky me, if I end up with a hole here for some unknown reason there is already a patch there to cover it? (Unlikely.)

Then it dawns on me. I’m reading the patch upside down.

The patch is meant to be read when looking at me. Now, I’m never going to be looking at me because I’m wearing the jeans, not staring at them. So this patch, this hidden and secret message is

This is a dirty little secret.

This patch is for the person who is special enough to be that close to my zipper to even be able to read that patch when the zipper is undone. I mean this is the zipper area. That patch and that lettering is not that big. You have to either have amazingly good long distance vision

or be up close and personal to know it even exists.

I’ve been wearing these jeans for a year and hadn’t a clue that patch was there, so clearly this patch really isn’t there for me. It’s there for you. I mean not ‘you’ (the ‘you’ who is reading this) but the ‘you’ that would be special enough to be that close and exacting some kind of effect on my zipper area.

As in, I’m against clothes that have sayings that help to objectify the person wearing them or offer an open invitation. (And you know the invitation I’m talking about. Wink. Wink. Nudge. Nudge.) I’m against my clothes having a voice. I’m against my clothes, especially the zipper part of my clothes, saying “Luck you, you’re getting in to her pants.” And this is in effect what this zipper-message is saying. This zipper is a pimp. I won’t be pimped by my jeans.

If anyone is going to say, “Lucky you, you’re getting into her pants.” it’s going to be me, except I won’t be speaking in third person.

There is no way my dirty-minded jeans are going to grant anyone permission or provide high-fives. So, for peace of mind and a good solid feminist re-frame, I’ve decided that the ‘lucky you’ is going to mean something else entirely. It’s going to mean “Luck you for having this fine, sturdy zipper to protect me, keep me snug and warm, and to keep the cold air out.”

And who is that voice?

That voice is my Lady Bits. And Lady Bits is talking to me.

(It’s the beginning of a new vagina monologue.)

Why can Lady Bits have a voice, but not my jeans? Because she should have a say on who enters the zipper zone and whether or not they’re ‘lucky’ to be there.

She and I, we are on the same team. My jeans, however, are dangerously close to working for the enemy and cannot be trusted.

Have you checked your zipper zone lately? Maybe you should. Some of them need to be put in their place and reminded of their role: to be controlled by the jean-wearer, not the other way around.