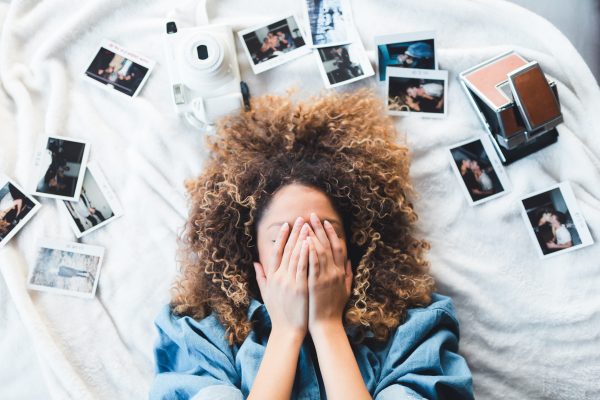 Note: This post stemmed from a prompt flashback to misery.

I’m writing a book and it’s a shitty long look backwards. I mean the writing isn’t shitty, but the looking back certainly is. Memoir seems to be a deliberately-written exploration of a series of miserable flashbacks. Or flashbacks on misery. Flashbacks with misery? Flashback to misery… take your pick.

A flashback is what?

A flashback is nothing more than a snappy memory of something that happened as early as yesterday or as late as decades ago. They don’t stick around long and they present themselves sharply, quickly, and then fade to black like the end of the scene or the act, the curtain pulled closed.  They are the Ghost of Christmas Past in personality, tormenting you.

Tangibly, they are like a stack of Polaroid pictures and not necessarily in chronological order.  Thumb through them quickly like a flip book and just like that, they are both there and then gone again, except you look like some kind of age-defying creature by the way that you are big and then small and then big again as you flip from image to image. Why? Because the images aren’t coming in chronological order.

A flashback is an artist of the circumstantial.

A flashback is triggered, triggered by any number of circumstances: something someone said; a place; an odor; a song or tune; a particular object. They are sneaky and tricky little fuckers. Mental Gremlins. (I have no idea if that pop culture reference is accurate as I’ve only seen that movie once … Lets assume I’m right.) They are Gremlins with the coy expression and behavior of Elf on the Shelf. They have that shit-eating grin painted on their face.

And you want to swat that creepy Elf down, out of your way, out of your face, like a fly that lands, vomits on everything good, and then flies away again. You’re probably like, “Look, Captain Dramatica, not all flashbacks are bad. Sometimes you remember something positive.” For me that’s called a memory. Not a flashback.

When has ‘flashback’ really been used in the context of remembering something positive?

When you hear someone say, “Oh, I just had a flashback,” (which is often ushered alongside a healthy shutter or a terrified expression seen in the movement of the eyes and eyebrows) that usually cues some kind of segue into some kind of dark, disturbing, embarrassing, negatively-impacting experience. If you use flashback as a good thing than I think you be the one who is wrong. For those of you who are with me and think flashback is a word that elicits nothing but miserable episodes and escapades, you get a verbal high-five for not being a weirdo and my permission to finger-point at those nonbelievers among us.

I’m an aspiring memoirist. I am attempting to make a living off thrusting my miserable flashbacks into the faces of sickos who want to read about my going through some depressing shit. And they’re doing so in the spirit of making themselves feel better. Twisted right?

Read that section again. This is what you should hear: my misery makes other people happy.

And since we are paying it forward, I would like to thank the Universe for all the wrong people it stuck in my path and to each of those wrong people who I spent more than enough time with, thank you. Together your flashbacks will forge my path to fame. I’ll send you each a note. “Thanks for the times.” And maybe a check. For each word spent on our relationship inside my book, you’ll get two cents because I offered my two cents on what our relationship did to me. Without you I wouldn’t be attending the Oscars for best film adaptation based on a book, so you should get a little bit of credit. I feel that’s fair.

So now you know I’m writing this book and it’s about past affairs of the heart. And they are bad because we’ve clearly established the very nature of a flashback.

Maybe you’re interested but you don’t read memoir. Or you’re interested but you only do audio books. Maybe you just don’t have the time. Perhaps your attention span is only long enough to read the length of this post and nothing as full-length as a book because you’re a child born after 1999. Lets take any of those reasons and assume that you’re not going to read my book when it’s finished regardless of how you feel about me right now (which should be that I’m hilarious and kick-ass and you want to be true Facebook friends). If you don’t read the book than this is what you’re going to miss…

Recess. I bravely walk up to a kindergarten classmate who once put his arm around me in the reading corner. He had deep dimples and shaggy brown hair. He’s surrounded by boys. They are playing the Ninja Turtles. I ask him to marry me and I give him a ring. He says no, the boys laugh, I turn and walk away not letting them see me cry and he chucks the ring at me.

Recess. It’s early days of spring. I’m back to back with my best girlfriend at the time. We each face our boyfriends. They are best friends, too. We are surrounded by our mutual friends. They softly chant, “Kiss. Kiss. Kiss.” So we do. This is my first kiss and it’s by peer pressure. What a let down. Completely unromantic. Terribly awkward.  And his lips were entirely too wet.

I’ve been dating the same guy for ten months which feels like an eternity. It’s late fall. A girl at school tells me he kissed another girl over the summer and has been lying about it ever since. I’m devastated and angry.

I get dumped in a handwritten note. I’m told he thinks of me as a sister. Yesterday we were fine. That afternoon, he’s holding hands and making out with a girl in our class who has a reputation for being easy and has the second largest set of boobs in the entire freshman class.

I’m head over heels for this older boy. I lose my virginity on top of the script to Our Town, a messy bed, and the smell of dog and bird and cat and ferret. This is not romantic. It hurts. And wasn’t planned … just happened. I have no idea what it all means.

I have the phone pressed tight to my ear. I’m stunned when he tells me he got my name tattooed on his back. I don’t believe him, but then a picture arrives in the mail. There it is between his shoulder blades: my name. I ask him what is he going to do if we ever break up. But that’s silly because “We’re never going to break up,” he says.

Seriously, need I go on? I know, you’re like, come on, just finish the line-up; we know you’ve got more dirt. Give me the rest of the cliff notes version and then I really don’t have to buy your book; I can just read your blog and follow you on social media, and I’ll piece it all together myself one quick snapshot and miserable flashback at a time.

I promise you that it won’t be as fun.

Now I realize that this whole post has become a tickler for this book that isn’t even finished yet. This is like the equivalent of a movie preview.

Maybe I sound like I’m desperate for you to read my book. I’m not, but I would like you to. Whatever, if you don’t.

Let’s just agree on a couple of things.

Then, you know, consider reading my book when it’s available. Just think about it. I mean this was fun right? And you didn’t have to do anything. You just had to show up and consume my really awkward, terribly embarrassing, a little bit melodramatic, borderline tragic series of miserable flashbacks.

Seriously, whatever you decide is cool with me. I’ve got a book to write. And a lot more miserable flashbacks to weave and craft into a compelling memoir.