My bestie and I — you know her as Maggie from Dear Universe (page 57 if you want a specific reference) — got together for the first time since December of 2019. The last time we were face to face, unmasked, swapping what's happenings, we were sitting in a booth at a restaurant, sharing chips and salsa just days before (or maybe it was after) Christmas. Neither of us knew what a gift that visit would be since it would be another eighteen months before we had another like it.

So there as we sat at my dining room table, sipping wine, munching on popcorn, and talking for hours. It's not that we didn't speak the entire time, but our phone or zoom chats were months in between and restricted to limited time blocks as we each navigated our COVID lives. Moms. Career women. Caretakers. We had a lot on each of our plates as so many working moms (and parents generally speaking) have.

Finally, at my dining room table, we could push out the months of pent-up feelings, experiences, opinions, vantage points that we've only been able to share in those small, infrequent doses. Finally, we could be in the same room together to hold space for each other's joys and wins, and our sadness and losses.

What emerged was that we each felt we had new steps to take in our personal development now that our hands, feet, and mouths weren't entirely bound by the masked darkness known as Coronoravirus that kept us holding our breath and sheltering in place both away from the world and some part of ourselves. It was time to journey back to our 'selves.'

The idea of our 'selves' had somehow been put on hold. Protecting our young was first. Doing what was necessary was first. Our livelihoods were first. 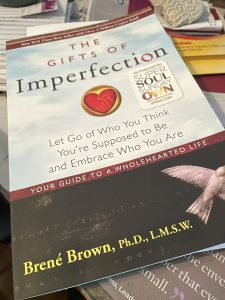 Doing what needed to be done has been the default mode and now that a little sliver of routine and dare I say "normalcy" has returned, there's actually just a smidge of space to say, "What do I want for me?" because a 'me' has long been waiting to be served and cared for in the same ways we've cared for others around us – our children most especially.

What hatched between us was a plan.

Maggie wanted to strive towards a few simple things one of them being reading more but she needed something manageable and specific to reach for to start accomplishing that goal.

"Brene Brown's 10th Anniversary Edition of The Gifts of Imperfection: Let Go of Who You Think You're Supposed to Be and Embrace Who You Are is now available. I've always wanted to read Brene Brown but haven't.  She's encouraging folks to get the book and read it while listening to her special 6-week series on her podcast she's doing with her sisters. I thought about trying to start some kind of book club but then I realized I didn't want to go through this book with just anyone."

"Let's do it together," I said. "Who better to dive into the shit with than your best friend?"

Mostly, I just loved the idea of regular time with my best friend of 20+ years for the next six weeks. That was enough for my soul even if I gained nothing else. Plus, she would make the perfect travel partner.

I set up the Zoom meetings. Maggie put together the reading schedule based on Brene's instruction.

We've taken the Wholehearted Living inventory and seen where we fall on 10 guideposts. We've already swapped emails and text messages of 'This is going to hurt,' as a result of our scores.

As I took the questions, I was aware that it was difficult for me to think globally about my life. I kept wanting to answer the questions from the perspective of an entrepreneur or the founder of my business. This was already a sign that perhaps my identity has drastically shifted since going into business for myself. That maybe my lens has gone too narrowly to only see myself now as Ally, the Lady Boss Owner of The Write Place, Right Time as though I don't have so many other parts of me to still fuel and acknowledge.

I also recognized how I answered questions about time and productivity versus questions about how concerned I was about others' opinions. I was happy to report that I care less now than I did a few years ago about others' opinions but yet those other questions about time/productivity were tripping me up.  I was happy to see that I could answer questions that WERE specifically about my work with the truth about how meaningful I feel it is and how much I enjoyed it. But less satisfied with how I ranked play and rest as a part of my current lifestyle. 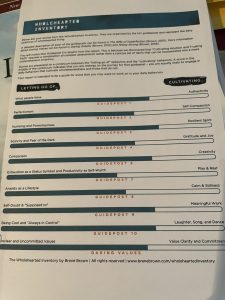 When I was finished and the inventory results were displayed I was pleased to see that I was beyond the 50% line in a great many areas. Areas that, again, a handful of years ago, I would have been struggling with. I felt an initial rush of "I'm doing it! I'm designing the life and becoming the person I want to be." This in and of itself is growth and shows how far I've journeyed as it wouldn't have been that long ago that I would have looked first at my lower scores and focused there first. Instead, I felt pride in those guideposts that showed I was beyond the halfway mark.

After my internal celebration, I noted my guideposts that are lagging behind. Two were no surprises at all, more just like "Oh, them again. Why won't you fucking leave me alone?" Perfectionism was one. Exhaustion as a Status Symbol and Productivity as Self Worth as the other.  I equate that second one to Accomplishment Identity (which I talk openly about in Dear Universe). The diagnosis that so many of us have - though, we probably all call it something different.

Two others were surprises... mostly. Scarcity and Fear of the Dark and Anxiety as a Lifestyle. The word 'anxiety' is what struck me. I've never considered myself an anxious person. It made me wonder if I'm not aware of how my anxiety shows up and I've dismissed it as something else. If, however, I think about anxiety as it pertains to scarcity and lack, then I can understand it. I can see it in my life. And if I was to say one thing that has plagued me this year, scarcity has been it. With that scarcity has come doubt and uncertainty which feeds anxiety.

But here is what I already know.

These guideposts or my scores, don't define me. They are merely a meter reading of where I am and where I'm heading. Like any assessment, really.

I'm proud of where I have grown and that I am able to see that growth.

I'm up to the challenge of doing deep and meaningful work in the areas where more growth is needed.

I understand that this journey is the point, it's the work, it's the transformation, and it's not the destination that counts.

I feel this is the right thing for right now. 2021 has already felt like a journey. Why not push it to its edges and see what lies beyond?

For once I have been able to tell when I'm IN a transformative place rather than be wading through the hard stuff unrecognizing it as growth and just whining about what a dick the Universe is being.

It's time to lean in.