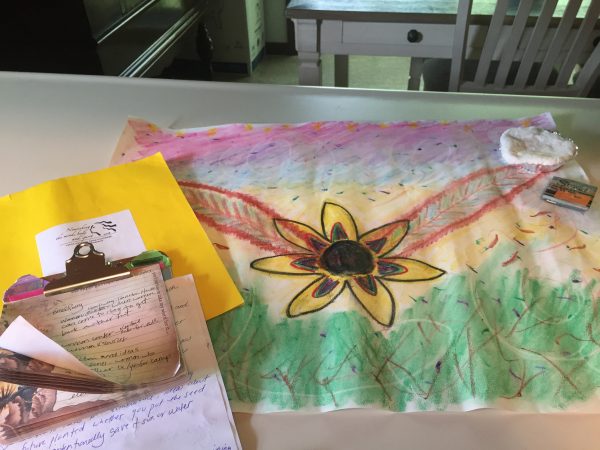 If someone had said to me that attending a facilitated session called Dance, Draw, Write would overwhelm me with emotion, or that I would rediscover a part of my childhood spirit, I would be extremely skeptical.

There I was Sunday morning, the last day of women’s weekend, saddened by the knowledge that in a few more hours it would be back to reality. I would be saying goodbye to women who had fueled and inspired me for the last 2.5 days, and whom I’d likely have to wait a whole other year to see again. Life is just so damn busy.

I wanted to bottle up the lake and its wind, trees, and water. Take home the aroma of dirt and grass and damp tents and cabins that now are nostalgic to this annual trip to Camp Hochelaga. Most importantly, I wanted to capture the feeling of strength, empowerment, and sisterhood that had been woven and tightened through communal song, arts and crafts, vulnerable dialogues, and late night giggles. How could I ensure I felt this way always even after leaving? Before those bittersweet goodbyes, however, there were still sessions left. The one I  selected for the morning was Dance, Draw, Write.

I know the facilitator and am familiar with her studio, Expressive Arts Burlington. It was my recommendation that she be a part of the weekend, one that I don’t believe anyone (including her) regretted. She brought song and connection, creativity and wisdom to our women’s weekend. Having been to her playshops in the past where I have had the chance to collage the archetypes, I had some level of expectation for what Dance, Draw, Write would entail.

However, even with an open mind and heart, I was nervous about dancing.

I’m no pro with drawing, but I’m among the populous who love to color. And, writing, well, obviously there would be no fear. Dancing… well, I was unsure. Now, I do love to dance at weddings. In college and grad school, I also loved the occasional night out with friends to dance at a club or bar.

The differences however are that weddings, bars and clubs have three typical criteria: 1) alcohol; 2) darkness; 3) crowds.

What does that mean?

It means your inhibitions are weakened by the influence of substance, the lack of light, and/or the the fact that you have very little space to move. Consequently, these three elements decrease your chances of making a fool of yourself. These places are also acceptable or assumed places for this behavior. Plus the music is loud and usually so fast, there is no time to think about your body in its movement.

Here, this would not be the case.

The dance portion of this session would be about connection, about internal and external synchronicity, about being free and allowing your self to just move. Purposefully yet without a plan. No choreography. No guidance. Just you, your body, the music. There was no alcohol. The lights would be on. There was no crowd. You would see everyone and they would see you. To me this was as awkward as waking up to see that the person in bed with you was staring at you while you slept. I hate that.

Now I was at Dance, Draw, Write, volunteering myself to be observed in an expressive, self-guided, boundary-less, conscious, sober dance.

Fear creepy-crawled into my throat and tingled on the underside of my toes.

My body was preparing for being pushed out of its comfort zone.  I have few problems putting my own truth into words and broadcasting it across my social media. Equally so, I have little- to no-qualms about public speaking or saying something sarcastic or flippant into a crowd for a laugh. I knew I shouldn’t feel silly, but I did.

I was about to let my body run the next twenty minutes instead of my mouth, mind, or hands. There was this discomfort that is simply hard to describe.

She started the music and eased us into the exercise simply by having us walk around and stretch, eyes cast downward at the floor and our feet. She asked us to connect to the earth. This was relaxing and a relief. We could make eye contact with something that did not have eyes to look back. She reminded us to imagine ourselves as toddlers, thinking about how they sing and dance and commentate without boundary, filter, or censorship.

Immediately I thought of my son dancing in his car seat as we listen to music wherever we go; or his bopping in the living room to the hot dog dance. I told myself that this was no different than he and I having a dance party in the kitchen or the car. The principles were the same: have fun, dance, move, don’t care.

The first song was instrumental and flowing. Flutes, perhaps? It instantly made me think about being in the trees, the wind through the leaves. There was even something about it that made me think of tribes sitting around fires, or wild horses moving through rivers and valleys. Whatever the music was, it was visceral and made me think of natural elements: earth, wind, sky.

And so I did. My wrists and hands first, finding their way to sway and flick to the right tempo. The rest of my arms joined after, drawing my fingers up over my head, up towards the ceiling, the sky. They swayed above me, around me, next to me. My legs and hips joined in.

I ventured beyond my own little space, finding myself on the opposite side of what had been a perfect circle where we stood for our instructions. And then back again.

Everyone else moved, too, but they drifted into static as I focused on my breath, my body, the notes floating along the air among and between us. Every time I lifted my arms, as if a bird attempting flight, I felt this light turn on.

I remembered being a little girl making up songs and dances in the trees next to my house. That same little girl, performed her favorite musicals with her friends next door. She demanded the attention of her relatives so she could sing Chantilly Lace, complete with choreography, and their full attention. That same little girl whose mother was told by her dance teacher when she was five that perhaps she had ADHD because “Alyssa just couldn’t focus or pay attention in class like her older sister.” The little girl with only one taped recital which shows that the steps to Twinkle Twinkle Little Star were never retained or followed. Making up her own patterns and moves was more her style. If I had known then what I know now, that would have been a sign I followed into my adulthood.

Suddenly, with every lift of my wings, every motion, every move, I rediscovered my childhood spirit. And I wanted to cry.

The music continued to change and eventually the twenty minutes came to a close altogether, but that feeling, that feeling of flight, that remembering of what it had been like to be young, full of spirit and song and dance, full of passion and energy, light, stayed with me. My childhood spirit rested on my shoulder like a new part of my conscience.

We were invited to draw whatever was evoked by our movement, our dancing. And so came this. The best way  I could encapsulate what my childhood spirit had meant to me when I was small, and what awoke in me through dancing.

Twenty minutes working with pastels went quickly and soon we were on to the writing portion. My pen went furiously to the page. This was what emerged…

My arms raise and dip, feeling the gravitational pull with each rise and fall.  There’s air beneath, swirling around me. The wind my own body creates as I twirl and twist, ebb and flow to the music.

For the first time since I was small, I remember the feeling of flying. To let your dreams and spirit lift you and carry you through the branches, beyond the trees, leaving everything behind.

No longer grounded to expectations, roots long ago established. Ideas about your future planted whether you put the seed their or not. Whether you intentionally gave them sun or water.

Days at this sanctuary have clipped the wires pinning these wings down. I am restored to what I was always meant to be. Strength and light, flight. A bird, a dreamer. A pilot at the front of the magnificent V.

I call across the sky to other feathers of this flock.

May they feel my breeze with every move across the sky. May they look up and see the glow, the magnificence of a spirit freed, a spirit in flight.  May they hear my fight song and feel strong enough to lift their feet from the Earth that tethers them down, to widen their arms, take breath, rise.

The sky has no limits. Clouds of hope in every shape and size. Wind has no real direction but will take you where you need to go. The sun will warm you when the day feels cold. The moon will guide you when everything grows dark.

And when rain falls as it inevitably will, free spirit or not, the branches of the nearest tree will be there to rest. Alongside you sister, will be another. To extend a wing, sing you a song.

When the skies are clear once more, she will rise with you as you prepare to raise your wings again. 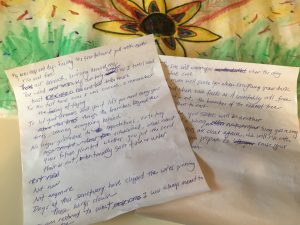 We joined together in a circle to share our work and words, our hearts. When my time came to share, because of the essence of time, I only shared the first Haiku.

After everyone went and there was still time left, I asked if I could read my longer piece as I felt called to do so. There was something about what I had written that I felt the rest would relate to, that they would hear and see and feel. And as I came to this line, I began to cry:

For the first time since I was small, I remember the feeling of flying.

I am not one to cry in front of others. Vulnerability has never been my color, though more and more I try to push and allow myself to be. Still, it takes a lot for me to let myself down in a group. To be anything other than the person who makes others laugh and lightens the mood. Here I was needing to share, needing to feel, needing to honor the childhood spirit that had been abandoned and in that morning had been reclaimed.

Each women’s weekend is filled with awakenings. That morning, my childhood spirit was shaken from its slumber.

You are a powerful facilitator, filled with grace and wisdom. Your warmth and light puts people at ease, so that they may open themselves up to the experiences you offer. Keep doing what you have been called to do. It works; it’s powerful. My continued best wishes for Expressive Arts to thrive.

This was another post inspired by my attendance at YWCA’s  women’s weekend.

2 thoughts on “My Childhood Spirit was Awakened with Dance, Draw, Write”